The FAUX SHOW is a “fairly frequent,” kind-of-annual revue show created by The Frenzie as a means to raise funds for our legitimate productions. Unlike our real shows, the Faux Show never takes itself seriously. Every year, the show is bestowed with a new theme, for which popular songs from the musical theatre repertory and everyone’s favorite radio ditties are rewritten and reimagined. Most important, however, is the fact every Faux Show is meant to be absolutely terrible: the costumes are shoddy; the set is unfinished and usually made of scrap cardboard; the choreography is ripe with cliches.
In embracing its absolute mediocrity, the Faux Show has become a staple of The Frenzie’s lineup, and every year, more and more gluttons for punishment join the fun – both onstage and in the audience. And as the audience grows, so does the Faux Show’s utmost insistence in providing the best “worst” entertainment in town! 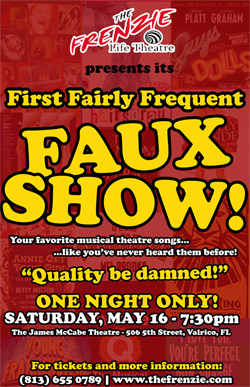 “There’s men wearing makeup, and dresses, and tights, and white people pretending to be black.”

For the Faux Show’s inaugural outing, eleven actors were purposely miscast in roles ranging from The Little Mermaid to Sweeney Todd, resulting in horrifying renditions of Broadway hits like Legally Blonde‘s “Bend And Snap” (performed by a gaggle of hairy men) and Jekyll and Hyde‘s “Confrontation” (brought to life by the prettiest, sweetest blonde ingenue.) 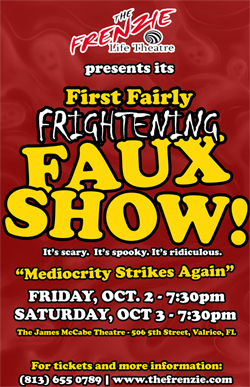 “Bet you’ll kill the person who brought you to this.”

How do you turn some of the most beloved Broadway classics into Halloween mainstays? By doubling the ridiculous and tripling the gore! The finished product featured a delighted Hannibal Lecter doing his best Lumiere in “Eat Our Guest,” a dejected Seymour Krellborn singing “Grow For Me” to his impotent penis, and a demented, straight-jacketed rendition of the schizophrenic “The Lives Of Me.” 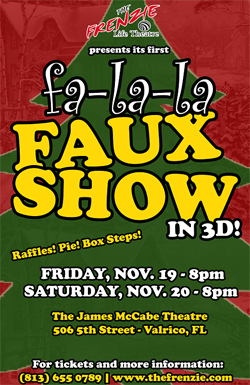 “I know what you’ve secretly been thinking: ‘Is this wretched garbage over yet?'”

What better way to celebrate the Christmas Holiday (a week before Thanksgiving, nonetheless) than by skewering the world’s favorite Jolly tunes? How about “Carol of the Bells” performed entirely with Shakeweights? Perhaps a “Grown Up Christmas List” that involves nipple clips and candle wax? Or maybe the Nativity Scene performed with animal puppets to the tune of “Circle of Life” from The Lion King. Everything from Mariah Carey to Les Miserables got destroyed in this slightly vivacious and extremely blasphemous sendup of our most traditional traditions. 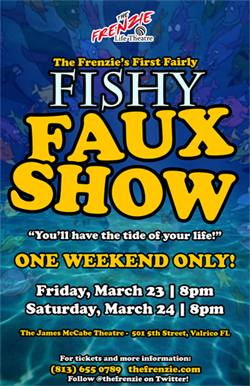 “YOU’LL HAVE THE TIDE OF YOUR LIFE”

“Our claws have been cleaned and sharpened; our scales have a healthy sheen – too bad you’re about to witness the worst show you’ve ever seen.”

After rowdy celebrations of Halloween and Christmas, what other theme could we possibly embrace but fish? Our trip “Under The Sea” featured a salty spin on a Little Shop classic as a couple’s beach rendezvous got interrupted by vegetation  in “Suddenly Seaweed,” Paula Deen expressing her love for good, crispy fish filets with “I Believe I Can Fry,” an ode to Elton John and hot tub engineering called “Wiener In The Jets,” and a cardboard Titanic hit with a styrofoam iceberg sinking to the dulcet tones of “My Heart Will Go On.”